I'm not living out of a suitcase.

I can go to the kitchen and create.

I'm sleeping on an actual bed.

I can go to the bathroom in peace.

Since my graduation, I have found myself with what could be referred to as "free time."

I have not had such a thing in four whole years.

Well. . . I was a super-nerd in high school. I did this program called Academic Decathlon. I shut myself in my room for hours as I pored over thick notebooks of minute detail in ten academic subjects. I could spout off the characteristics of a Chinese erhu and explain all the ins and outs of global warming while doing calculus without a graphing calculator (against the rules--I'm still bitter about that one). And my team won a national championship.

So I have been turning on the TV a lot more than I have in recent memory--just because I can (take THAT, responsibility!). And tonight, when I put on the tube for some background noise, I came across on NBC program called The Voice. 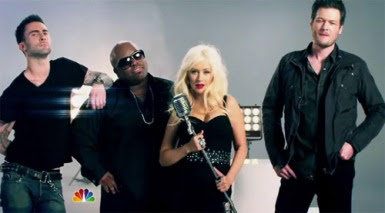 And it is awkward. On steroids.

In theory, the format show is pretty cool idea. There are three rounds: a blind audition round, where the celebs/"coaches" choose their team based  upon voice only. The coaches then mentor their flock, and set their team members off in pairs for a second round of battle whilst pairs sing the same song--and the coach picks whose performance advances. In the third round, the team members perform live (the phase of the show I watched) and garner votes. It's like American Idol, Oprah, and a musical gladiator battle all rolled into a couple hours.

First of all, the panel of judges/life coaches/Richard Simmons-esque cheerleaders are comprised of the genre rainbow that is Adam Levine of Maroon 5, Cee Lo Green of Gnarls Barkley, Blake Shelton of the Nashville scene (and Mr. Miranda Lambert), and Xtina. Separately, these are all pretty cool people--I am fans of their music, and they are highly respected in their musical circles (even Blake, I guess? That statement is questionable). But together. . . the dynamic is just weird. Like when group members are trying to force a smile and play nice during a presentation to the class.

The contestants seemed better than your average American Idol contestants, I guess. There were a couple I'd buy a song off of iTunes for. But. . . the judges had NO criticism. At all. It was all one big love fest after each performance.

Cee Lo, on girl who sings Kanye's "Heartless" as a jazzy lounge singer: "I feel like. . . that was the best rendition of a song I've ever heard."

Xtina, on sub-Scotty McCreery cowboy: "Umm...I'm just waiting for you to take your pants off. Amiright, ladies?!"

I knew there was a reason I wasn't getting cable in the new house.
Posted by Amy at 8:21 PM No comments:

My Great Chain of Being (or...completely random concerns aired for all to see) 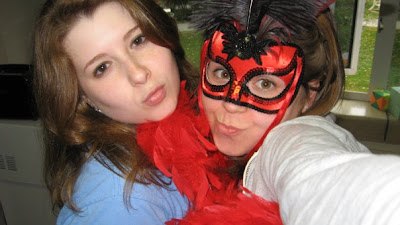 1. This "no homework forever!" thing . . . it's kinda the best thing ever. I was such a drilled student that I still chide myself for not busily writing a paper at 9 pm. It's like waking up from a nightmare and remembering that your life was much better than you thought it was 5 seconds ago.

2. It's ridiculously scorching here in Tennessee. So I decided to make a smoothie for breakfast.

3. Our official move-in date is FRIDAY. I am so ready to be an un-homeless-vagabond.

Someday, we'll talk about all the fun in acquiring this property.

5. What do you eat with mango salsa besides caribbean dishes?

6. I have decided to become more of a dress-wearer. I blame this on the EXTREME heat, but I think it's a wise fashion choice for me.

8. Here's where that fact comes in handy: I seriously can't reach the top shelf of my new kitchen cabinets. Not even close on the tip-toes. I'm going to have to find some real estate on the bottom ones before it's too late.

Email ThisBlogThis!Share to TwitterShare to FacebookShare to Pinterest
Labels: musings

What do Grendel and a Jail Cell Have in Common?

I have a place to live now. 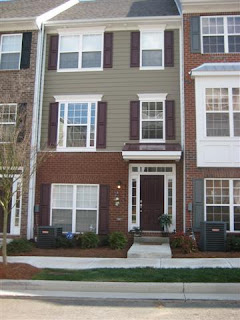 This is the outside! It's a four-story townhouse in a developing part of Nashville perfect for young professionals (=me). While I was driving to the first showing, I couldn't keep my oohs and ahhs to myself--the neighborhood is just too cute! There are boutiques, froyo shops, cupcake stores, a dog park, and a beautiful creek that runs along the edge of the development. I cannot believe I actually have an address there.
The top floor is a loft and belongs to yours truly.
Can I get an amen?!
It's kinda huge. As in, 20x11 kinda huge.
And please don't laugh at me...but I have absolutely NO furniture to my name. Not even a bed.
And also don't laugh...but I have NO visual creativity in my body. I'm serious. When we read Beowulf in my senior English class in high school, our no-nonsense 75-year-old teacher decided we were going to make Grendel puppets out of brown paper bags. And she showed us her puppet first so we wouldn't feel bad about our lack of artistic ability. So I worked really, really hard on my Grendel puppet; I mean, how often do you get to break out little googly eyes your senior year of high school? I was so excited to turn mine in. When Mrs. Hardin went through our stack of heinous puppets, she laughed as each was more ridiculous than the next. When she got to mine, she paused. She cocked her eyebrow to the side...then she cocked the puppet to the side. She looked at me and said, "This. Is ugly." And she put it down without another word.
I can't make puppets of fictional monsters. The only thing I've ever had on my walls in the dorm is a plethora of "Happy Birthday!" signs in different languages a friend made for me and pasted on my wall. In March. My senior year. Many have compared my dwelling places to prison cells.
AND I REFUSE TO LET DOWN THIS BEAUTIFUL HOSUE.
I'd rather this cute little place, amidst cupcake shops and boutiques, to be compared to a prison.
Soooooo...I have decided to turn to YOU, my wonderful friends, for some guidance.
Where do you get design inspiration? What's been the best furniture deal you've found? Do you have any favorite Etsy dealers? Wanna come to Nashville and decorate my room in exchange for a hug and some cookies??!
Posted by Amy at 4:31 PM No comments:

Email ThisBlogThis!Share to TwitterShare to FacebookShare to Pinterest
Labels: awesome

One Less HGTV Show That'll Never Have Me

I have decided I NEVER want to be on House Hunters.

I'm in the midst of negotiations for this townhouse...and I'm already a nervous wreck.

I really don't need a camera crew to capture the way I incessantly twirl my hair when I'm nervous. Or chew my lip. Or bug out my eyeballs.

And I don't need Suzanne Whang to chirp about how the seller rejected my offer because of my dearth of credit. Seriously.

And this is what it's like to RENT something? How about going through actual negotiations, after you've stood naked with your finances in front of God and everyone, when you're trying to BUY a house?

It's hard for me to believe that it's almost summer (and, subsequently, that no less than three cicadas have flown into my face today).

I mean, that picture below this post...it has snow in it.

I know, I know. Wayyyyyy to keep you updated.

Needless to say, it's been a very busy past couple of months. 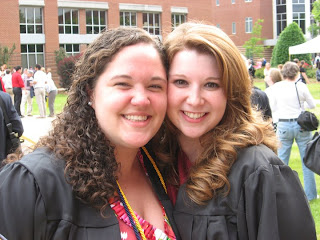 I graduated from college! You can see here that I'm wearing no cap. In fact, I didn't take one single picture with my cap on after the ceremony. The day such such a blur and the culmination of 3 months of solid exhaustion. When I finally plopped myself on the couch that evening, my mom quietly said, "You know, you should've taken a picture with us."
You guys. I was so out of it I didn't even take a photo with my parents.
*Cue mortification*
So you know that whole thing where you're supposed to get a job after graduation? Well, I did. I graduated on May 9th and began working May 11. For those keeping score, I graduated on a Saturday and began work on that Monday.
Yep.
Oh, but I didn't even tell you the best part yet: I'm kinda homeless. As in, I have no address.
*Cue Mortification*
It's ok. I'm just glad I have friends who will take me in. Otherwise...well, I don't really like to go a day without showering anyway, so...you do the math. Please. I graduated with an English degree. But a couple of my friends and I are looking at an ADORABLE townhouse to rent. I'll keep you posted; I'm probably definitely going to need some decoration advice, as my dorm room last year looked like a prison.
Seriously. The only things I had up on my walls were signs that said "Happy Birthday!" in thirteen different languages. And I didn't even put them up. To top it off, my birthday is in March.
So did I tell you I work in publishing? It's kind of awesome. I work in corporate communications, so I get to talk to people about books. And then I'm also a freelance editor, so I kind of get to make them too. I love my job. Love love love. I'm really glad I get to do this for a while.
Shameless plug: if anybody wants to send me work, I'm more than willing to edit your things to death.
So as you could probably guess, there hasn't been as much cooking creativity as I'd like there to be. But once I get settled into a house within the next month, you better believe I'll be cooking up a storm. There's only so much Subway a girl can take, ya know?
How are YOU doing?!? I've missed you all!
Posted by Amy at 1:11 PM No comments:

Email ThisBlogThis!Share to TwitterShare to FacebookShare to Pinterest
Labels: I haven't been on in forever and I'm sorry, musings, update
Older Posts Home
Subscribe to: Posts (Atom)

Amy
I cook. I eat. I avoid studying at all costs.

Archives (Enter At Your Own Risk)